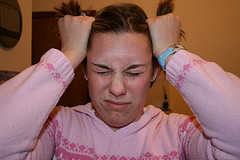 I write these posts in advance and schedule them to be published once a week, on Mondays. Typically, I work about two or three weeks ahead of the publication date. As a result, I’ll often write something and then see a similar story on another blog sometime later, before mine has been published. It’s really frustrating.

For example, my post Twice Bitten, Thrice Shy was published on July 12. It was actually written during the last week of June. In that post, I talked about assumptions and pulled out the old ass-u-me nugget, along with a picture of an ass. Then, on July 9, Steve Jones over at SQL Server Central put out an editorial about assumptions featuring a picture of an ass. (At least it wasn’t the same picture.)

Today, a similar thing happened. I wrote the previous post about consistency last week, around September 7, but it wasn’t published until September 20. In that one, I referenced McDonalds, the Big Mac, their old “two-all-beef-patties…” jingle, and a picture of a Big Mac. Two days ago, September 14, SQLRockstar published a post titled Big Mac Index that featured those exact same things.

In a similar vein, I wrote Hey, Check Out The New Kid about things to check for on SQL Servers when you start a new job. After writing that, I discovered Brent Ozar’s 60 Minute SQL Takeover presentation, which covers the same topic, although from the perspective of being handed a new server at an existing job. Well, at least we recommended doing pretty much the same things.

Maybe I need to think a bit harder about the comparisons I use and not go for the easy ones.

Maybe I need to change my blog site password so my draft posts can’t be read.

But something’s got to be done because this is getting frustrating!