Have you ever had random inserts into a large table fail? Most of the time, inserts happen fine, but every so often you get a failure with a “primary key violation” error? If your primary key is an integer column with the identity property, you may be wondering how this is possible.

The first time this happens, someone (maybe you) will reseed the identity column to a new value (zero, in this case):

If your table has a lot of records that have been deleted, you might be able to continue on for quite some time before encountering another primary key violation. But this is not a permanent fix – you will encounter this error again eventually.

Another temporary fix, but one that will likely allow you to go for a longer time without encountering the primary key violation again is to reseed the column to the smallest negative number the datatype allows (assuming you have a positively incrementing identity value). For example, to reseed an integer column, you can run:

Assuming you started at zero or 1, this gives you another 2 billion values to use. However, I’ve found most programmers, for some reason, have an aversion to negative numbers as primary keys. There no reason for it, but it’s there, so the DBA has to deal with it.

Of course, the permament fix is to change the data type from integer to BIGINT, but, if your table is big enough to have this problem, that will also present its own set of challenges – this is a “size of data” operation, meaning  SQL has to modify every single row in the table and the time it takes to do this is directly related to the size of the data in the table. The change will require the table to be locked, lots of transaction log will be generated, etc. See Kendra Little’s post about the issues you will face here.

The path of least resistance (and least (or no) downtime) is to reseed the identity column. This is virtually instantaneous. The problem becomes “to what value should I reseed it?”

To answer this question, you need to know where the gaps in your used identity values are. Ideally, you’ll like to reseed to the start of the biggest gap.

I went searching for some code to do this and came across this solution from Microsoft:

However, when I ran this, I got the following error:

Looks like my table has too many gaps for this to be a valid solution. So back to Google I went and found this really nice solution from Henning Frettem. When I ran his code, I saw my table had 97,236 gaps! So which should I use? Ideally, the largest one! Henning’s code didn’t readily give that, so below is my modified version which gives you that information and sorts from the largest gap to the smallest, since the largest gap is what you are really looking for. 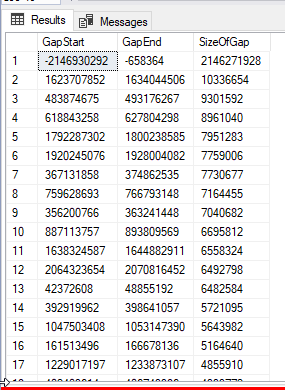 If you encounter this problem and are unable to change the datatype, you now have the code to find the largest gap to use when reseeding your identity value!

One thought on “Finding All Gaps In An Identity Column”