The next step then was to look at the code that was being run and determine why the database was taking more than 30 seconds to return data. To make a long story short, there were stored procedures calling stored procedures calling views and the whole thing was basically a mess. But the root cause, believe it or not, was implicit conversions, mainly with dates. The views were joining several tables and the stored procedures were referencing several of the columns in WHERE clauses. In some of the tables, dates were stored as date datatypes, but in others they were stored as varchar datatypes. As a result, virtually every join required an implicit conversion and almost no WHERE clauses were SARGable.

A common way of troubleshooting performance issues is to look at the execution plan using SSMS. Unfortunately, implicit conversions are easily overlooked in an execution plan because they don’t have their own little symbol – you have to mouse over a symbol and read the pop up text to see them.

Let’s look at a simplified example. We have the following table:

For demonstration purposes, I’m not going to join to any other tables, but the concept is the same. Let’s look at this SELECT statement:

If we execute this statement and include the execution plan, we get the following:

Nothing exciting there. Standard stuff.  But let’s hover the mouse over the clustered index scan icon and look at the text that pops up: 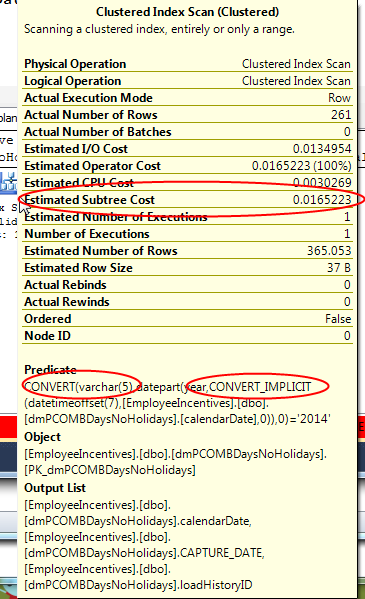 You can see two conversions – let’s look at them in reverse. The second is the implicit conversion that changes the varchar column from the table into a date datatype to feed into the YEAR function.  Because the YEAR function returns an integer, we explicitly convert this into a varchar(5) to compare to ‘2014’, which is the first conversion listed. (Don’t ask me why it’s varchar(5) and not varchar(4). That’s just another example of how bad this code is.)

Note the subtree cost. We’ll come back to that.

Now let’s re-write this query and try to eliminate that explicit conversion. We can use this:

Because the YEAR function returns an integer, we can compare the result to the integer value of 2014, instead of the string value ‘2014’. Our execution plan looks exactly the same:

But the mouseover text now has some differences: 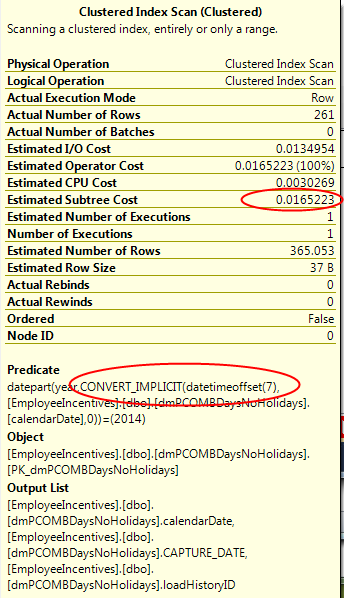 Our explicit conversion is gone – as expected since we were the ones who got rid of it. We still have the implicit conversion of the column data to a date datatype for use in the YEAR function. So we’re doing one less conversion, which means SQL Server has less work to do. You would expect the estimate subtree cost would drop.  But, surprisingly, it did not. Hmm.

Now let’s make one more change. If we actually look at the data, we see it looks like this: 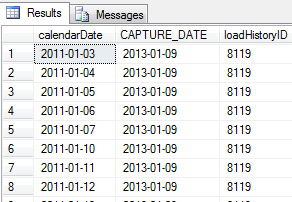 The data values all are in the format YYYY-MM-DD. Knowing this, we can now write our query as follows, keeping everything as character data:

Again, the resulting execution plan looks identical to our other two:

Looking at the mouseover text, we see we no longer have any conversions at all. Yet, the subtree cost remains the same. 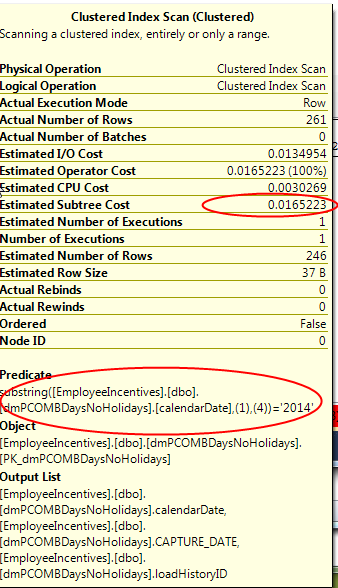 In summary, our original query did the following:

Because this is a non-SARGable query, these three steps have to be done for each and every row in the table.

Our re-written query does the following:

We’ve cut the work down by 66%. That’s an improvement, but it’s a rather small one. Unfortunately, without changing the database schema, it’s all we can do.

Now in these examples, the table only has a few thousand rows, so we’re not seeing changes in cost or noticeable changes in performance. However, in the actual application I was troubleshooting, these conversions were happening for multiple tables with hundreds of thousands of rows, in multiple places, in WHERE clauses, and on joining columns. It all added up to very slow performance.

Unfortunately, for situations like these, there is very little a DBA can do to dramatically improve performance. All of the WHERE clauses in these examples are non-SARGable and will require an index scan of all rows rather than an index seek of a subset of rows. To fix performance issues caused by this type of problem, the only answer is a code re-write, schema re-design, or, more likely, both

As a test, I reproduced the tables in the process using correct and consistent datatypes, created the same indexes on them, loaded the exact same data, and ran the queries (modified only to not perform all the no-longer necessary datatype conversions) against the new schema. Performance was improved by an order of magnitude. If you only looked at execution plans, it might look like the changes did not make any difference, but in reality, the difference was significant.

2 thoughts on “Implicit Conversions Can Be An Unseen Danger”